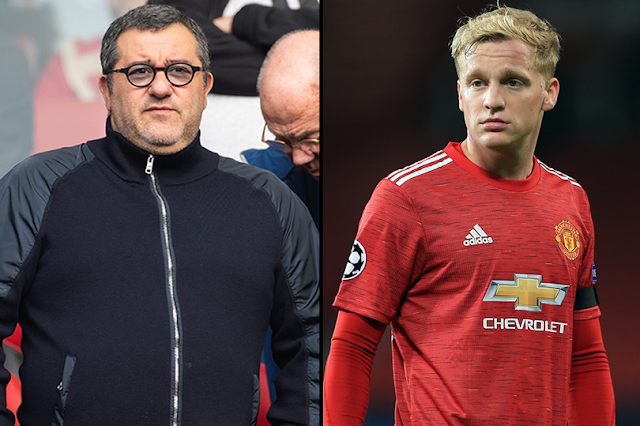 Paul Pogba's silence was deafening after Mino Raiola stoked the fire over his future.

Raiola described his client's time at Manchester United as "over" on the eve of United's most important game of the season against RB Leipzig. United would lose against the Bundesliga side which saw them crash out of the Champions League.

Ole Gunnar Solskjaer denied Raiola's interview with Tuttosport had an effect on his squad's performance against Leipzig but it's clear that Pogba's future at the club remains a distraction.

United triggered the extension clause in the 27-year-old's contract to avoid losing him for nothing in the summer but it's becoming increasingly clear he will leave in January or at the end of the season.

Pogba came off the bench against Leipzig and undeniably influenced the game. United were unable to salvage a draw and progress to the last 16 but his cameo gave a glimpse into what he is capable of when committed and at the top of his game.

The midfielder was rewarded in a start in the Manchester derby against City on Saturday after which the statement over his future arrived.

Pogba stressed he was committed to the club and would always fight for his teammates. He also defended Raiola over a report published by German outlet Bild. Actions speak louder than words and Pogba has done little to improve his standing with his current employers by publicly sticking with the agent that has dragged United through the mud.

His actions present United with a new problem involving summer signing Donny van de Beek. Supporters have been keen to see more from the Dutchman following his £40million move from Ajax but he has been forced to wait patiently for his chance to impress. Van de Beek has done well during his limited game time but is in direct competition with Pogba for a place in the team.

Some would say you field your best team, Pogba included in the eyes of many, regardless of the speculation and uncertainty over his future. Others would say Pogba does not deserve to be given minutes, especially at the expense of Van de Beek, due to recent events.

Solskjaer and United need to put Pogba in the shop window. The Reds paid around £90million to sign the Frenchman and will have faced the fact they are set to make a substantial loss on their star midfielder. Pogba's stock has plummeted and his contract situation only makes matter worse. Juventus and Real Madrid are interested but how much would they be willing to pay? An upturn in form could see the two European giants accelerate their transfer plans and potentially lead to United receiving a large fee. Ed Woodward has highlighted the financial impact of the COVID-19 pandemic on multiple occasions and extracting as much money as possible from Pogba's sale will be a priority for United's executive vice-chairman.

By giving Pogba the opportunity to sell himself to any interested party, United run the risk of alienating Van de Beek. The Dutch international has remained patient and stressed he is not worried about his long-term future at the club. Solskjaer has insisted his chance will come but if he is overlooked for the benefit of Pogba, it would be a kick in the teeth.

United could field both men in the same team but have found limited success with the diamond formation this season. Fred's form means he should also be a guaranteed starter and Bruno Fernandes is undroppable leaving only one other midfield place up for grabs. Should that place go to Pogba ahead of Van de Beek, United risk creating a new problem entirely.