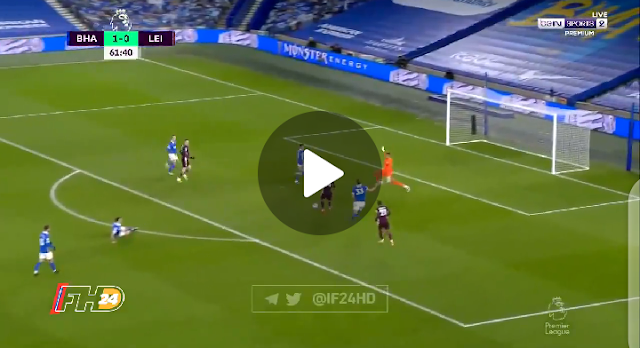 Goals from Kelechi Iheanacho and Daniel Amartey powered Leicester City to a 2-1 triumph over Brighton and Hove Albion on Saturday.

The Seagulls had taken a first half lead at the Falmer Stadium, nevertheless, the African duo found the net in the second half to inspire the Foxes to victory.

Graham Potter’s men came into the English Premier League tie with the ambition of ending their poor streak, while visitors were aiming to brighten their Champions League ambition.

Ten minutes into the game, Adam Lallana put Brighton ahead after profiting from an assist from Neal Maupay.

Having won the ball back from a Leicester throw in and Maupay does well by holding off the challenge of a couple of defenders, he flicked the ball through to an unmarked Lallana who slotted the ball past Kasper Schmeichel.

That goal was a reality check for Brendan Rodgers’ men who bounced back from their slumber, albeit, were unable to put the ball past Robert Sanchez.

The King Power Stadium giants got the second half to a promising start with Iheanacho smashing into the side-netting after getting a pass from Timothy Castagne.

After a notable shift, man-of-the-match Iheanacho was substituted for Hamza Choudhury in the 90th minute, while his compatriot Wilfred Ndidi and Amartey played from start to finish.