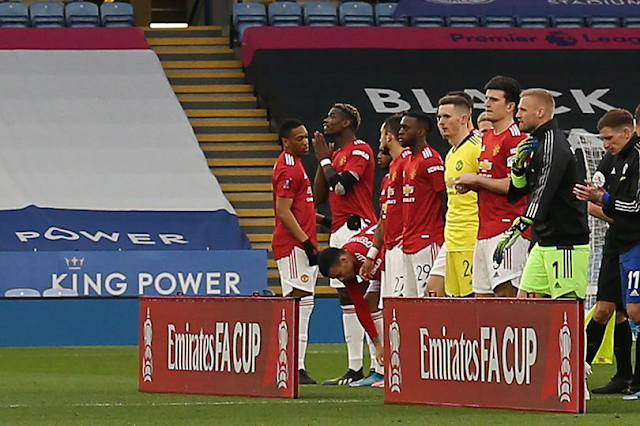 Man United go into the international fortnight having exited the FA Cup but Ole Gunnar Solskjaer is hopeful some players will thrive away from the club.

Ole Gunnar Solskjaer is hopeful Paul Pogba, Donny van de Beek and Anthony Martial will benefit from international duty over the next fortnight.

The trio started in United's FA Cup quarter-final defeat at Leicester and Pogba and Martial were called up to the France squad earlier this week, while Van de Beek was named in Frank de Boer's Dutch squad.

Pogba started for the first time in six weeks and Van de Beek made his comeback after a five-week absence at Leicester, where the duo contributed to Mason Greenwood's equaliser in the 38th minute.

However, Pogba and Van de Beek were substituted when United simultaneously made four substitutions in the 64th minute with Leicester 2-1 up. Martial stayed on for the full duration in his first start in 10 days.

Martial has scored just two goals in his last 18 games, Van de Beek has started just twice in the Premier League all season while Pogba was recently sidelined for the best part of six weeks with a thigh injury.

"I think an international break now will give Donny and Paul, hopefully, chances to play," Solskjaer said. "It will give Anthony a chance to go away with [France], they get a change of scenery, you get energy from that.

"The boys have been at Carrington training ground every day for a long, long time, and that change of scenery will give you some energy as well.

"The break comes at a good time and we'll be ready at Easter, don't worry about that.

"I think we're building a squad that can cope with it but we've had six or seven injuries at the same point in the same positions, to be fair, which made some players play a lot.

"But that's something we have to get used to, if and when we are to be successful, we have to handle this and hit a higher level than we did today. That's what we're striving towards.

"I've been impressed. Under these circumstances, which are unprecedented, I don't think anyone anywhere in the world has experienced these times before. I've been impressed by my boys. The run we've been on has been excellent. Unfortunately we couldn't find ourselves tonight and sometimes that happens."