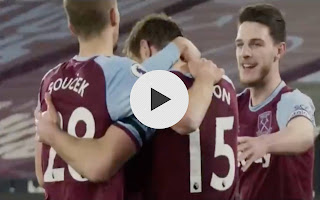 In the 28th minute of West Ham United’s Premier League clash against Leeds last Friday, Craig Dawson headed the Hammers into a 2-0 lead, the club have now shared some unseen footage of the mom

As Dawson wheeled off to celebrate following the latest display of his aerial prowess, which was shown plentifully during his time at West Brom, Pablo Fornals screamed out a nickname for the centre-back.

Fornals can be heard shouting ‘Dawsonaldo’ after the 30-year-old’s goal, which is of course a play on the name of all-time great Cristiano Ronaldo, who has headed into the net a lot due to an insane leap.

Dawson now has 17 Premier League goals to his name from 194 top-flight appearances out of defence.