Watch Video: Erling Haaland gives Dortmund the lead against Bayern after two minutes with edge of the box strike amid Chelsea speculation 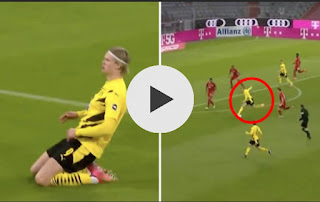 Erling Haaland, are you taking the mick? Two minutes into Borussia Dortmund’s clash with Bayern Munich at the Allianz, he’s given the visitors the lead.

Haaland is, as has been well established, the greatest young striker on the planet. Both he and Kylian Mbappe look certain to lead the new generation of football, picking up where Lionel Messi and Cristiano Ronaldo left off.

Everything that Haaland has touched over the past 18 months has turned to gold, and as per Sky Sports, that has left Chelsea interested in signing the striker in the upcoming summer transfer window.

Haaland has shown once again this evening just why Roman Abramovich is thought to be prepared to splash the cash to sign him, picking up the ball on the edge of the Bayern penalty area before finding the bottom corner, with just two minutes played.

A blow for Bayern early on, but what a moment that is for Haaland!