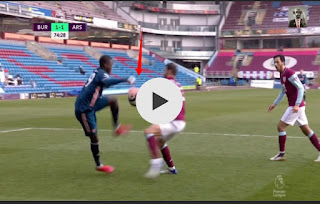 In the 74th minute of this afternoon’s game-week opening Premier League tie between Burnley and Arsenal, the Gunners had themselves a claim for a handball after the ball struck Erik Pieters.

Nicolas Pepe tricked away in front of the ace before firing a cross-cum-shot in, that appeared to be deflected onto Pieters’ arm but the play continued.

In a matter of mere seconds, Pepe looked to flick the ball over the left-back, with it once again striking the defender’s arm, the Arsenal star appealed for a penalty but a VAR check found no wrongdoing.