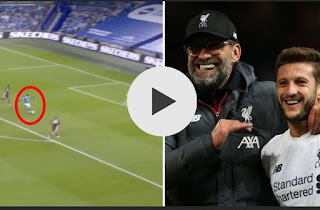 Adam Lallana has done his former employers Liverpool a huge favour by scoring the opening goal for Brighton against Leicester City this evening.

Lallana enjoyed six good years at Liverpool, playing a starring role in the early stages of Jurgen Klopp’s tenure at Anfield. Ultimately, with struggles with form and fitness seeing him fall down the pecking order, leaving the club was the best option for all parties, with Brighton the club fortunate enough to secure his services.

Allowing Lallana to leave will have been a tough decision from Klopp, with the pair having a close relationship during their time together on Merseyside, but with the former England international having scored the opener for Brighton against top four challenging Leicester City tonight, Klopp’s decision has been justified.

Liverpool have a real fight on their hands if they want to have any chance of qualifying for the Champions League, with Leicester City being one of the sides at risk of dropping out of the top four. Dropping points tonight would be a real blow for Leicester, and in turn, great news for Liverpool.