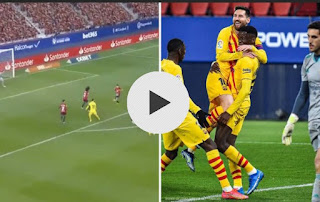 After a disappointing season last time around, which saw them pipped to the post in the title race by arch rivals Real Madrid, Barcelona will have been hoping to have been rejuvenated under Ronald Koeman for the 2020/21 campaign.

However, after a slow start to their league season, Barca fast found themselves off the pace, with Atletico Madrid threatening to run away with it. Atleti have stumbled in recent weeks, allowing the Catalan giants with an opportunity to engineer their way back into the title race, and with their victory over Osasuna tonight, they’ve stayed on course.

Jordi Alba was the man who gave them the lead earlier in the contest, with a fine left-footed strike leaving the goalkeeper with no chance. Ilaix Moriba, an 18-year-old La Masia product, has added a second – and how!