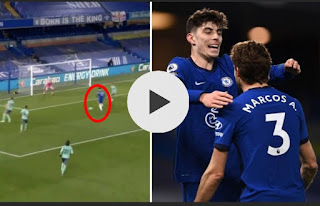 Chelsea have taken the lead over Everton at Stamford Bridge, with the returning Kai Havertz taking the plaudits for the goal.

The Blues had dominated for the bulk of the first-half but had nothing to show for it, much to Thomas Tuchel’s frustration, no doubt.

As Marcos Alonso made his way into the Everton penalty area with the ball on his left-foot, you sensed danger for the visitors.

Alonso fired the ball across goal into the path of Kai Havertz, whose effort cannoned off Toffees defender Ben Godfrey and past Jordan Pickford.

Though Havertz would no doubt like to claim the goal, on what is his first start since January 27th, it did look as though the ball was going wide from his initial effort.

Nonetheless, it’s his influence which has forced the error from Godfrey here, and ultimately given Chelsea the lead with 30 minutes on the clock at the Bridge.