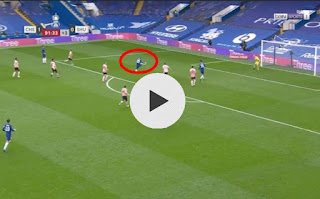 In the 91st minute of this afternoon’s FA Cup encounter between Chelsea and Sheffield United, the Blues broke free on the counter after a long throw-in from Reece James.

The ball was deflected off the back of Kai Havertz and rolled to Hakim Ziyech, the playmaker quickly knocked the ball across to Mateo Kovacic, who drove forward and sent it wide to Ben Chilwell.

Chilwell notched his second assist of the game, having sparked the own-goal opener, with a beautiful first-time cross into the box.

Hakim Ziyech outstretched his leg to control the ball in mid-air before sliding it into the back of the net with an instinctive finish. Ziyech entered the field in the 72nd minute for midfield starlet Billy Gilmour.

Thomas Tuchel, who has kept everyone guessing with his lineup choices since becoming boss, has been handed more selection dilemmas after some solid displays from out-of-form players this afternoon.
ByOrizu KelechiPosted in22 March Post a Comment
Share
Labels#Chelsea Updates
Newer
Older