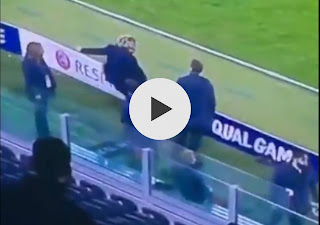 It’s been dreadful to watch the entitlement at Juventus in recent years as they try with all of their might to make the Champions League a closed shop, but perhaps they shouldn’t be included in that vision if they can’t overcome Porto when the odds are stacked in their favour.

They crashed out the the Portuguese giants last night even though they were reduced to ten men, while there’s an irony in the fact that Cristiano Ronaldo was the player who wimped out of the way in the wall which led to the vital goal.

It’s a club who aren’t afraid to twist the rules or make payments to ensure things go in their favour, and the entitlement and frustration was perfectly summed up by club legend Pavel Nedved at full time last night:

It shows that money and a sense of superiority can still be overcome by a well organised side in the Champions League, so it’s even more beautiful to see Juve providing the perfect advert for why thing shouldn’t be changed in the competition.