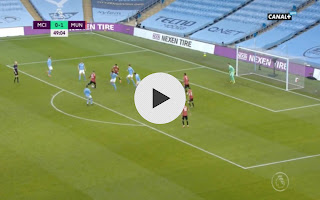 In the 48th minute of today’s marquee Premier League clash between cross-town rivals Manchester City and Man United, the Red Devils extended their lead to 2-0 with a fine move.

Academy graduate Dean Henderson, who is standing in for an absent David de Gea, showed what he can do if he’s made the permanent No.1 with a massive long-throw out to Luke Shaw on the left.

Shaw charged forward in a lung-busting run, leaving Joao Cancelo and Kevin de Bruyne trailing, before slipping it wide to Marcus Rashford as he made it into the final third.

Rashford showed some tidy control before he slotted back to Shaw, the left-back took a touch in the box before drilling the ball into the bottom corner with a brilliant finish, Ederson was left rooted to his spot.