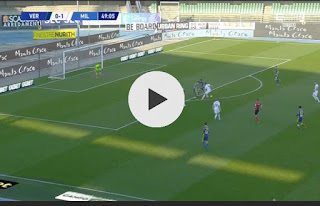 In the 49th minute of this afternoon’s Serie A encounter between AC Milan and Verona, an opportunity was sparked when Chelsea loanee Fikayo Tomori played the ball out of the back to Rade Krunic.

The Bosnian ace shuttled the ball forward to Alexis Saelemaekers, who drove forward before slotting it towards the edge of the area, where Rafael Leao dummied the ball to leave it for Diogo Dalot.

Dalot, a loanee from Manchester United, showed some brilliant attacking quality as he shimmed the ball away from a defender, carrying it into the box, before firing the ball straight into the top corner.

This was a truly amazing finish from the marauding full-back, the Verona goalkeeper didn’t even bother moving, there was no chance of stopping a strike like this.

What a wonderful way for Dalot to make his 20th appearance for the Rossoneri, it also comes as the 21-year-old has been recalled for Serie A action, after sitting on the sidelines for the last three league ties.