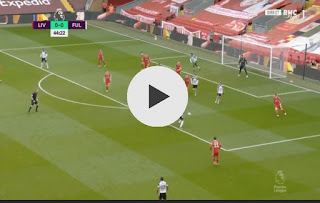 Liverpool have been stunned right on the brink of halftime in their Premier League encounter against relegation candidates Fulham.

Ivan Cavaleiro whipped in a free-kick from deep on the right flank, it was cleared to the edge of the box, where Mohamed Salah controlled the ball.

Salah was quickly muscled off by a pressing Mario Lemina, the midfielder breezed away from the Reds superstar before firing the ball into the bottom corner with a brilliant drilled finish.

Jurgen Klopp’s side just can’t seem to get anything going at their famed Anfield home, it’s become the opposite of a fortress for the Reds since the turn of the year.