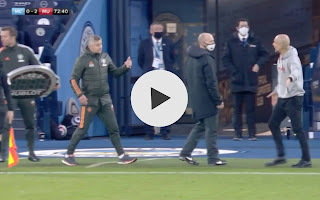 In the 72nd minute of this evening’s marquee Premier League encounter between Manchester City and Man United, Ole Gunnar Solskjaer and Pep Guardiola were involved in a heated clash.

The managers appeared to disagree over a decision, leaving the pair to wave their arms about and shout at each other – we can’t imagine that pleasant words were exchanged.

Mike Dean was acting as the Fourth Official and the enigmatic referee positioned himself in between the duo, but did very little intervening as the argument continued for some time.

Solskjaer is clearly not afraid of battling his counterpart in this manner, with the Norwegian involved in a similar clash with Chelsea boss Thomas Tuchel when the two sides met last weekend.

The linesman and Mason Greenwood were also witness to the disagreement, with the wonderkid preparing to come on for the Red Devils as they went on to beat their rivals 2-0.