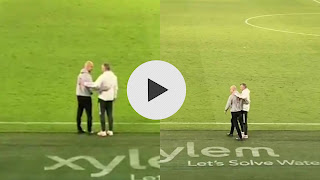 It was all love and respect between Ole Gunnar Solskjaer and Pep Guardiola after today’s Manchester derby at the Etihad.

Historically, we have seen tensions boil over in this fixture, with the players and managers less than friendly with each other.

However, that’s not so much the case nowadays, with the players on the field being predominantly mercenaries and the managers in the dugout not appearing to have much against each other.

While they did appear to be arguing on the sidelines at one point in the contest, there was no lasting bad blood between the pair, as has been proven with this clip showing them embracing after the full-time whistle.

They’re two managers who can probably find a lot of common ground, despite managing arch rivals.

The only thing that one could ever hold against the other is on Pep’s side, with Solskjaer boasting a better head-to-head record against him than virtually any other manager ever…