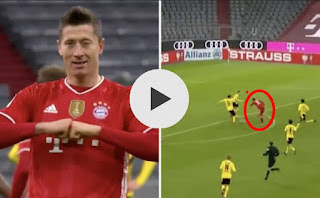 The Polish icon has replied with a hat-trick, one which has secured all three points for the champions.

Lewandowski was robbed of a Ballon D’Or for his unbelievable performances in 2020 by the decision for it to be cancelled as a result of the pandemic, but still scooped up the bulk of the other individual awards.

If Bayern are able to replicate their success of last campaign on the trophy front, he’d have to be odds on to win it again, because he’s proving to be just as consistently excellent as he was last time around.

See below how he netted his third goal against Dortmund today, brushing off the challenge of Erling Haaland, who had two goals to his name within the first eight minutes of the contest.