Watch Video: Steven Gerrard busts moves in the Rangers dressing room after closing in on first SPL title in 10 years 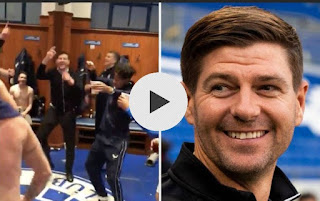 Steven Gerrard, dancing queen – who would have thought it? The Rangers boss was filmed while in full swing during his side’s dressing room celebrations this afternoon.

Gerrard’s men defeated St. Mirren 3-0 at Ibrox this afternoon to put themselves within touching distance of winning the SPL, ending a run of dominance from arch-rivals Celtic and restoring power where they would argue it belongs.

While Celtic are enduring a difficult season, Rangers have been absolutely phenomenal. Zero losses, just the three draws and all the other games won, conceding just eight goals in the process. THAT is how you win a league title.

Gerrard, understandably, looked to be pretty happy with what his side have achieved, with the players celebrating their win this afternoon as though the title had already been signed and sealed – in essence, it has.

The Liverpool captain, who is earning his stripes at Rangers ahead of a potential switch back to Anfield later in his career, celebrated in style after the win this afternoon. Have a look at this…