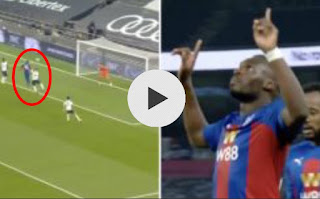 Christian Benteke has netted an equaliser for Crystal Palace on the stroke of half-time at the Tottenham Hotspur Stadium.

Spurs dominated for the bulk of the first-half, with Jose Mourinho’s men set to head into the half-time break a goal to the good after Gareth Bale continued his good run of form by converting from a Harry Kane pass across the face of goal.

However, Tottenham managed to score just the solitary goal, a slender lead, and have paid the price as a result, with Christian Benteke scoring in injury time to draw Palace level against the run of play.

This is vintage Benteke, rising high between the centre-backs and finding the back of the net with a superb defender. The Belgian has done it countless times over his Premier League career, but even now, teams are finding it difficult to stop him.

A brilliant header from Benteke, and it’s very much game on in North London…