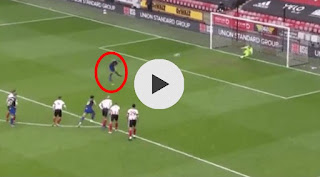 With such an appalling win record in this 2020/21 Premier League season, Sheffield United appeared to be doomed even before this game against Southampton had kicked off.

The Blades could still have done without Chelsea loanee, Ethan Ampadu’s reckless challenge on Nathan Tella leaving the official with no option but to point to the penalty spot.

When dead-ball specialist, James Ward-Prowse, on penalty taking duties, there was only ever going to be one outcome, and the Southampton man didn’t disappoint as he sent Blades keeper, Aaron Ramsdale, the wrong way.