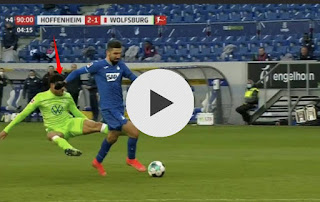 Wolfsburg defender Paulo Otavio was shown a red card during his side’s defeat to Hoffenheim this afternoon – and it’s safe to say he could have no complaints.

In the age of VAR, a red card isn’t always the last we’ll see of a player in a certain game.

As was shown with Erik Pieters’ superb goal-line block against Arsenal earlier on Saturday, decisions can be overturned if they are proven to be incorrect.

However, Paulo Otavio could have no complaints whatsoever when he was shown a red against Hoffenheim. The video assistant didn’t even need to bother reviewing it.

This is, by definition, taking one for the team, with Wolfsburg throwing everyone forward, including the goalkeeper, in hope of finding an equalising goal.

With the home side threatening to break, Otavio was left with only one option – to launch himself into the attacker. Brutal, but fair play for the commitment to the cause!