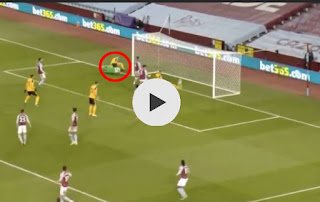 Wolves’ Romain Saiss produced a contender for the worst miss in football history during his side’s clash with Aston Villa this evening.

Nuno Espirito Santo’s men have had few difficulties in the defensive department this campaign, but having lost Raul Jimenez to a skull fracture against Arsenal earlier in the season, they have developed problems in front of goal.

Those problems came to a head against Aston Villa this afternoon, with Romain Saiss, who in fairness is not renown for scoring goals, missing from the goal-line.

It’s not entirely clear how he’s managed this, and it’s certainly comparable to THAT Kanu miss during his West Brom days, as it defies everything we thought we knew about football.

How, that close to goal, has he managed to put it over the bar? You could put him in this exact position 100 times in training this week and you can be sure he’d convert every single one…