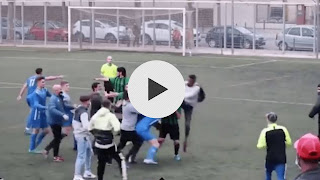 The Spanish seventh tier game between CEM Bon Pastor and UD Carmelo descended into chaos at the weekend, as supporters invaded the pitch to fight with the players.

The away side were leading 3-2 according to the Daily Star, but once Bon Pastor defender, Rodrigo Tejada, had earned himself a red card for a ridiculous act of aggression, that appeared to spark all-out war from the stands.

With both teams fighting each other and spectators, the match official had no option but to blow his whistle.