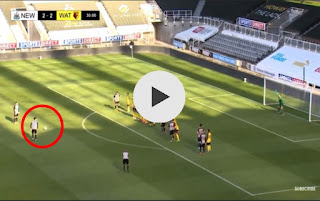 In the final minute of extra-time against Watford, with the scores level at 2-2, the Magpies had themselves a free-kick from 30 yards out and up stepped talented attacking midfielder Elliot Anderson.

Anderson fired the ball over a stacked wall with a powerful dead-ball strike from range, it was soaring toward the top corner and the valiant hand of the Watford keeper was not enough to keep this one out.

The 18-year-old’s dramatic strike booked Newcastle a place in the Quarter-Finals of the FA Youth Cup, which is a competition for Under-18s sides.

The Chronicle report that the Toon outfit will face either Aston Villa or Burton in the next round, whilst adding that the Tyneside team won the prestigious competition in 1962 and 1985.

Anderson is usually part of the Under-23s team and actually made his senior debut off the bench as a cameo substitute in the defeat against Arsenal in the Premier League.

Young Elliott provided some real magic to prove that he should continue to be called upon by the Under-18s side for their FA Youth Cup fixtures this season.

Anderson, who is the grandson of former Newcastle ace Geoff Allen, has made 15 appearances across the 23s and 18s this term, scoring eight times and registering an assist.

He looks to be a talent that is on the very cusp of breaking into the first-team permanently.