David de Gea’s difficult season took another turn for the worse in Seville on Monday night, as Luis Enrique left him on the bench for Spain's Euro 2020 opener vs Sweden.

Being a substitute has unfortunately become a regular occurrence for the Manchester United keeper in recent months.

After being the undisputed No.1 at Old Trafford for almost a decade, Ole Gunnar Solskjaer made the decision to relegate him to Premier League understudy.

Following the Spaniard’s trip home for the birth of his first child, Dean Henderson was given a chance, with the England international remaining in place for the rest of the domestic season.

De Gea switched to the role of cup keeper, ending his season in misery as United fell to Villarreal in the Europa League final in Gdansk.

The 30-year-old couldn’t be blamed for the goal they conceded in regular time, but he did have a nightmare in the resulting penalty shootout - failing to keep out 11 Villarreal spot kicks, before missing the decisive one himself.

That put the rubber stamp on De Gea’s most disappointing season since Sir Alex Ferguson brought him to English football in 2011.

Solskjaer has thus far refused to confirm who will be handed the starting role next term, but has accepted the dilemma must be resolved.

It’s been a strange season with regards to goalkeeping. At United most of the time we’ve had a No. 1 who has been playing most of the games,” Solskjaer admitted.

“We brought Dean back to challenge David and he’s had a very good season.

“But David is David. He’s really played well, buckled down and really taken on the challenge.

“I’m really pleased with the two of them, it’s difficult to have that kind of rotation, you don’t rotate that much normally, I’ll have to find a solution for next year definitely.”

Reports have claimed that De Gea is planning to hold talks with his manager ahead of the new season, where he will make it clear that if he isn’t the starter, he will look to force a move.

But Luis Enrique’s decision to stick with Unai Simon is a clear sign of his current standing both at club, and international level.

Simon has been Enrique’s starter in the build-up to Euro 2020, but De Gea will have still hoped to be given the nod against Sweden.

There is a growing feeling that for De Gea to re-establish his reputation as one of the game’s top stoppers, he may need to move on, with his Spain omission only likely to heighten that sentiment. 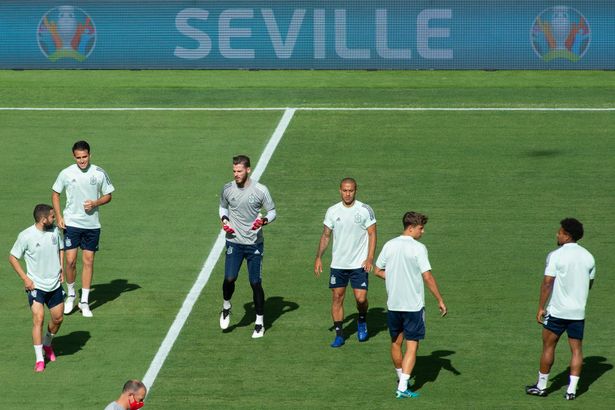 In recent days, Keylor Navas has been linked with a move to United, suggesting Solskjaer could even go as far as upgrading his options in between the sticks.

Regardless, it is becoming abundantly clear that David de Gea is standing at a huge career crossroads and those planned talks are looking increasingly pivotal.