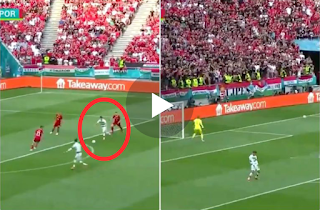 Portugal looked as though they were about to take the lead in the 4th minute of their Euro 2020 opener against Hungary, but Liverpool star Diogo Jota was totally unaware of a wide open Cristiano Ronaldo.

Portugal won the ball on the right flank and the ball was played through, when when it was slipped in behind to Diogo Jota, who turned away from danger is lovely fashion.

After all that work though and in the midst of being crowded out by Hungary defenders, Jota didn’t notice that all-time great Ronaldo was in plenty of space right alongside.

Instead, Jota fired a long-range shot at goal which was parried away by Peter Gulacsi.

Ronaldo was livid after what appeared to be an innocent and unintentional snub, screaming out and pointing down to the ground.

Fernando Santos’ side have had a plethora of chances in the opening period of the match but just haven’t been clinical enough at all.
ByOrizu KelechiPosted in15 June Post a Comment
Share
Labels#Arsenal Updates, #europa League, #Portugal
Newer
Older