Video: Cristiano Ronaldo misses point-blank chance after Bruno Fernandes puts it on a plate for Portugal in Euros opener against Hungary

In the 42nd minute of this afternoon’s Euro 2020 clash between Portugal and Hungary, Fernando Santos’ side seemed like they were finally about to take the lead in a heavily-favoured matchup. 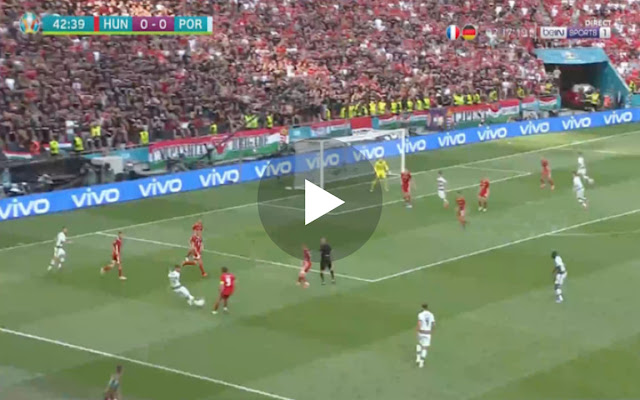 Raphael Guerreiro showed battle to win the ball back after protesting for a foul before quickly slipping it back to Manchester United playmaker Bruno Fernandes.

Fernandes didn’t even take a touch on the left-wing as he sent in an inviting low cross into the box, Liverpool forward Diogo Jota missed with a back-heel flick attempt, but the ball ran on…

It flashed across the middle of the six-yard line as Ronaldo came onto the ball, somehow the all-time great sent the ball soaring over the bar with a shock miss from point-blank range.

Ronaldo could only hold his head in his hands after the rare blunder.

A true in head in hands moment ?@Cristiano has scored 104 goals for #POR – but he somehow diverted this delicious Bruno Fernandes cross over the bar ?#ITVFootball | #Euro2020 pic.twitter.com/NtrJ1blVLz

Portugal have dominated the proceedings but have lacked that clinical touch in front of goal. In a Group of Death also alongside France and Germany, the Selecao cannot afford to drop points against Hungary.