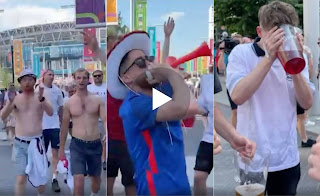 After Gareth Southgate’s men captured victory to start off their campaign, supporters were understandably revelling in the glory and excitement outside Wembley Stadium.

Many fans were seen with their shirts off as they were downing pints, whilst some added to the atmosphere by sounding off Vuvuzelas – which became popular at the 2010 World Cup in South Africa.

The excitement and promise brewed from a rare comfortable victory for England in a major tournament may well do the trick to relax what will be some sore heads tomorrow morning.