“We didn’t have that in the past” – Pundit explains the secret to Southgate’s success, names the Chelsea star who’s undroppable for England + the Euro 2020 star who’d be a good signing for Man Utd

Former Manchester United midfielder Luke Chadwick has spoken exclusively to CaughtOffside about his thoughts on England’s start at Euro 2020 after they enjoyed an opening day win over Croatia. 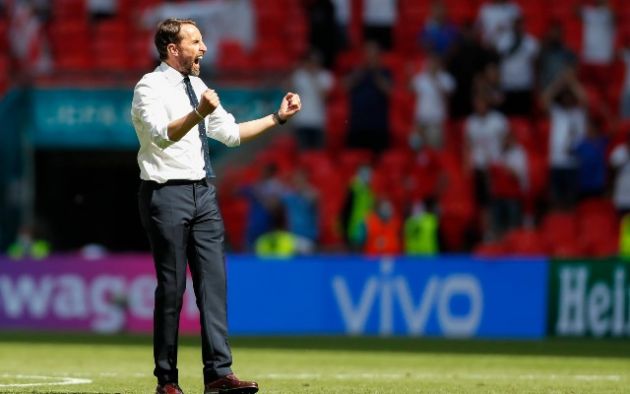 The Three Lions beat Croatia 1-0 thanks to a goal from Raheem Sterling, and Chadwick feels it was pretty much the perfect start for Gareth Southgate’s side as they look to build on their promising run to the World Cup semi-finals three years ago.

“I thought England played really well, they controlled the midfield areas against some good players,” Chadwick said. “They moved the ball, mixed it up with longer passing and shorter passing.

“I was one of the ones moaning in the pub that they started Sterling ahead of Grealish but Sterling was probably the best player on the pitch. Then Trippier was playing left-back as well and I thought ‘why is he playing there?’ but he cut inside and played balls into the channels, proving a huge threat for England. I thought Southgate got the team spot on and it was one of the best performances I’ve seen from Sterling for a long time.

“Kalvin Phillips was another who we maybe weren’t expecting to start, but he and Rice were extremely solid. It’s going to be tough even for the captain Jordan Henderson to dismantle that partnership.

“Overall it was a really solid first performance, you can’t really ask for more than that at the first game of the tournament, you don’t want to play incredibly well and win 5-0 and then find that’s your peak. It was a great start ahead of playing the old enemy Scotland on Friday evening.”

Chadwick also paid tribute to the fine work done by manager Gareth Southgate, who continues to perform beyond expectations despite not being the biggest name or most exciting-looking candidate when he took the job.

It seems clear, however, that the England players have a lot of respect for Southgate and seem to play their best for him, and Chadwick has credited the former England defender for the relaxed atmosphere he’s created in the squad – something that has so often been lacking with the national team as they’ve under-achieved at previous tournaments. 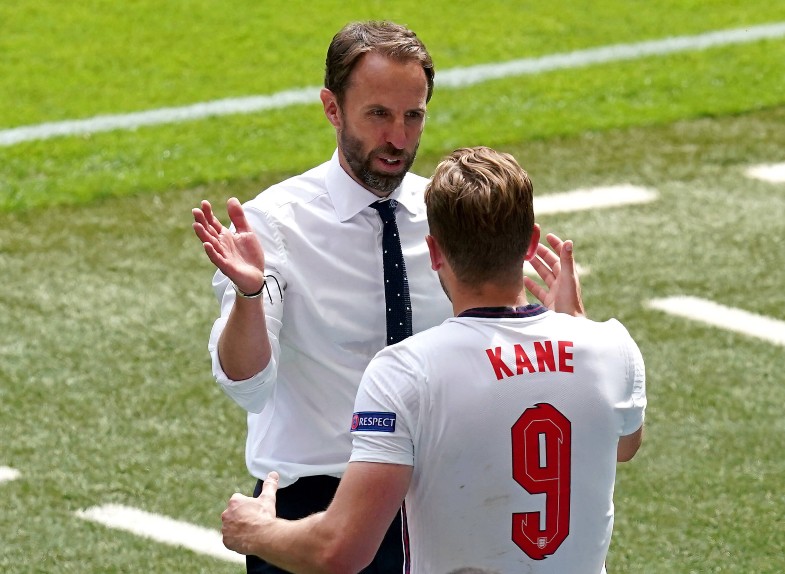 Most importantly, Gareth Southgate seems like a really good person, an honest person who treats everyone with respect, whether players are in the team or not. He always stands up for his players,” Chadwick told CaughtOffside.

“He’s also got huge experience and know-how at tournaments, having come up from manager of the England Under-21s. It bodes well, and it shows the FA did well going with their own man after some foreign managers and Sam Allardyce didn’t really work out. Southgate’s been a breath of fresh air, he doesn’t court media publicity, but speaks well and is an intelligent guy. All the players have bought into what he’s doing.

“I don’t think I’ve ever seen an England squad look so relaxed going into a tournament. You see the bits on social media, the interviews, it looks like a really relaxed place – we didn’t have that in the past. We’ve had incredible squads but there’s now more of a club mentality; the work the FA has done in that respect is fantastic.

“England used to crumble under pressure at tournaments and I hope they don’t do that at this tournament, but it does seem more relaxed than what we’ve had in the past.

“A part of that is the relationship Southgate has got with the press. He doesn’t have that arrogance to not speak to some people, I think he speaks to everyone and shows courtesy to everyone. He’s popular with the media, the squad and the public as well.”

Chadwick did add, however, that he’d like to see just the one change for England’s next game against Scotland, with Aston Villa star Jack Grealish coming into the side.

The pundit admits, though, that he thinks Chelsea’s Mason Mount has become particularly undroppable for England, so if Grealish does come in it would most likely be for Sterling or Phil Foden, who won’t be easy to drop either.

“I would like to see Grealish play,” Chadwick said. “It’s probably the first time in a tournament that we haven’t really been able to fit in all our best front players. There are so many options in that attacking midfield three.

“I think Mason Mount will continue to start, he’s not just a ball player but he puts the work in too. The wide positions are maybe a bit more up for grabs, but Foden played well and Sterling was superb. He wouldn’t be making the team weaker though with the options he’s got, so if Sterling and Foden come out there’s Rashford and Grealish, but I think Mount’s the one I can’t see coming out of the team because of how much Southgate seems to think of him.” 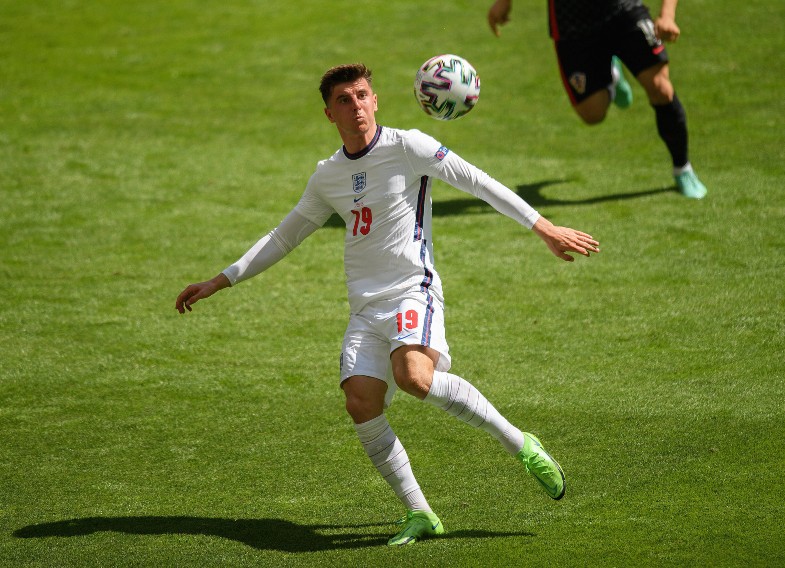 Mason Mount is becoming a hugely important player for England

Chadwick was also hugely impressed by Kalvin Phillips’ performance for England, with the Leeds United midfielder setting up the winning goal for Sterling with a fine run forward and inch-perfect through-ball.

It perhaps seems inevitable that Phillips will soon be eyed up by bigger clubs, particularly if he can keep up these performances at a major international tournament.

When asked if he’d consider Phillips a potential target for his old club Man Utd, Chadwick said: “He’s obviously had two brilliant seasons, he was a stand-out player in the Championship a couple of seasons ago and has now come to the Premier League and taken to it like a duck to water. He’s been superb this season.

“I think Manchester United will be looking at those central midfield positions. Obviously he’s a huge Leeds fan, he’s grown up there, so it might not be easy to get him to Manchester United. Having said that, we’ve seen it with Rio Ferdinand and probably to a greater extent with Alan Smith who grew up at Leeds and then came to United.

“He’s a hugely talented player and would certainly strengthen any squad he went to. If he can keep up his form for England I’m sure there’ll be plenty of suitors across Europe, but I wouldn’t be surprised to see him stay another season at Leeds to see what Bielsa’s building up there, and due to his relationship with the fans at the club.”

Finally, Chadwick also paid tribute to Denmark captain Simon Kjaer for his role in helping out Christian Eriksen after the distressing scenes of his collapse during the game with Finland.

The Inter Milan playmaker suffered a cardiac arrest during the match but is thankfully now recovering well in hospital, though there’s no doubt the hugely worrying scenes will live long in the memory of all football fans.

Chadwick surely speaks for all of us here when he says the incident really put football into perspective. 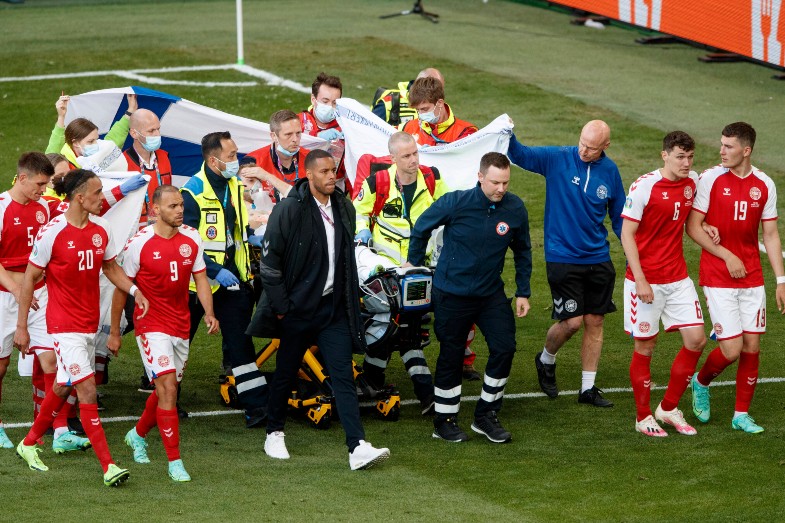 “Obviously it was shocking, something you don’t expect to see on the football pitch with fit professional athletes playing the game they love,” Chadwick said.

“It was a horrible thing to see, it brought back memories of the Fabrice Muamba incident. As soon as you see CPR being administered, you sort of fear the worst immediately. It was obviously incredible work done by the medical staff, plus the Danish captain Simon Kjaer, who acted so quickly.

“It was a scary, scary hour or so until the word came through that he was in a stable condition in hospital, but it certainly puts everything into perspective. It is simply a game of football, and when someone’s lying motionless on the floor getting treatment like that, you maybe think we take football a bit too seriously at times.

“We can’t really say if the amount of games affected it, it seems more like a freak occurrence that can happen to anyone at any time. I guess we’ll have to wait on reports for what the future means for Christian Eriksen, but the main thing is he’s alive and I think that was everyone’s worry for half an hour, forty-five minutes on Saturday.”