The right side of United's attack has for a long time been a big issue, but that's no longer the case. 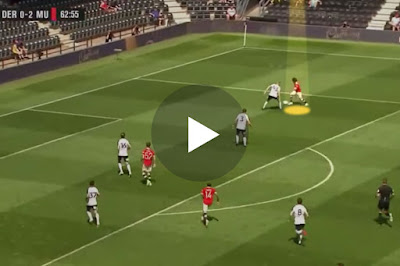 For all of Ole Gunnar Solskjaer’s time in charge of Manchester United, the right side of his attack has been a problem.

It’s why the club chased Jadon Sancho last summer and revived that pursuit this year in order to finally land their man.

Despite their failure to bring in the 21-year-old ahead of last season, alternative moves were still made to bolster that side of United’s attack, with deals for exciting youngsters Amad and Facundo Pellistri both agreed last October.

Given each were still just teenagers, no immediate impact was anticipated. Although he was impressive when he did feature, game time was sparse for Amad following his eventual arrival in January, whilst Pellistri moved to Deportivo Alavés in the same month in order to accumulate some important first-team minutes.

Starts were few and far between for Pellistri in Spain, yet he did show plenty of his potential when he did play, even drawing praise from Atletico Madrid star Luis Suarez following a 1-0 defeat to the Spanish champions in March.

The former Liverpool striker posted a picture of him and Pellistri on his Instagram with the caption “A pleasure @facu_pellistri, continue like this and good things will come."

Now back with United, the teenager was given a chance to impress on Sunday as Solskjaer's side began their pre-season preparations with a 2-1 win over Derby County.

He scored and proved a real handful across the course of his second-half cameo appearance.

What stood out predominantly was his skill and threat with the ball at his feet. He finished the match having been successful in three of his five dribbles, and having won two fouls in dangerous areas inside the opposition’s half.

He's not the tallest player at 5ft9in, but he’s difficult to dislodge, even when running at speed. We see that in the below grab where he takes down a lofted pass superbly and then turns on the burners, running at and bypassing Derby defender Max Bardell with ease.

His impressive technical skill was also on show when he effortlessly controlled a through ball from Shola Shoretire before dribbling past Derby keeper David Marshall and passing into the empty net.

It wasn’t just Pellistri’s on the ball work that impressed though, but also his positioning in attacks and his defensive work when United looked to press and dispossess Derby. The teenager knew when to push high, when to stay in shape and what angles to make in order to cut out key Derby passing lanes.

It'd be foolish to make sweeping conclusions based on performances in pre-season fixtures, yet the cameo of Pellistri, combined with the potential he illustrated at both Deportivo Alavés and Peñarol before that will give Solskjaer plenty of optimism.

His immediate future may still see him depart on another loan move, however, he’s illustrating that he could be a top right-sided attacker at United for many years to come.

When you consider that, plus the ever-exciting development of Amad and the arrival of Sancho who’s already performing at an elite level, then you can make a case that United’s problem position has arguably become one of their strongest on the pitch.

This is a credit to their good recruitment across the previous 12 months, and it’s a sign that United are a club that is improving both on and off the pitch.