Follow throughout the day for the latest Man United transfer rumours and breaking news.

Manchester United made a winning return to action on Sunday in their first friendly of pre-season.

It was a squad missing the majority of its key stars as they take holidays following participation in international tournaments but United still put on a promising display as they defeated Derby County 2-1.

Tahith Chong and Facundo Pellistri grabbed the goals for United, while Colin Kazim-Richards pulled one back for Wayne Rooney's side.

The match also saw Jesse Lingard pull on a red shirt for the first time since returning from his loan spell at West Ham.

After the match, Ole Gunnar Solskhaer gave an update on the transfer of Jadon Sancho.

"From what I understand only paperwork, small little details, hopefully we can announce something," Solskjaer said. "Let's get all the paperwork done and get him over the line and then I can say what I truly feel about the player."

This time Calcio Mercato claim Juventus are looking to bring the 24-year-old to Turin this summer.

They say Juve are willing to offer Adrien Rabiot as part of a deal for the Dutch midfielder, in a move which could please all parties.

Teden Mengi is expected to leave on loan this summer but yesterday he featured for United against Derby.

"Teden did excellent for us last season," Rooney said. "I think he was getting better but unfortunately he got injured towards the end.

"At the minute from Teden's point of view there is nothing I can do, I still can't bring loan players in.

"I think he knows, and Manchester United know, he is a player I like. My hands are tied behind my back at the minute."

It looks set to be a pivotal summer of change at Real with Carlo Ancelotti replacing Zinedine Zidane as manager and immediately being tasked with replacing two of the club's best players.

Former club captain Sergio Ramos has already signed for Paris Saint-Germain while defensive partner Varane is a target for Manchester United after rejecting a new deal with the Spanish club.

This one has come out of seemingly nowhere.

MEN Sport understand United are looking at two potential defensive signings this summer and Gazzetta dello Sport suggest Kalidou Koulibaly is one of them.

They claim the Senegal international is unhappy after Napoli rejected an opening €30m bid from United to sign him.

Koulibaly could be available this summer.

Inter Milan are 'refusing to exclude the possibility' of a summer move for Manchester United defender Alex Telles.

The Brazilian defender is being regularly linked with a potential loan exit in the weeks ahead despite insisting he is looking forward to his second season at Old Trafford.

Telles, 28, only signed from Porto on deadline day of the summer window last October but struggled for playing time in his debut campaign amid fierce competition from a revitalised Luke Shaw.

Atletico 'do not want to lose' Kieran Trippier this summer

Something will have to give on this one.

United are interested in a move for Kieran Trippier as he enters his final year at Atletico Madrid, but the La Liga champions do not want to lose him.

AS report today Trippier is not for sale and can only leave if he hands in a formal transfer request.

Derby County manager Wayne Rooney said he did not wave at Manchester United supporters as his loyalty is now to his current club.

United supporters sang, 'Rooney, Rooney, give us a wave' during the second-half of their 2-1 win at Derby but United's record goalscorer ignored their request.

After United supporters sardonically jeered Rooney, they treated him to a chorus of 'you Scouse b-----d' before serenading him with his 'He Goes By The Name Of Wayne Rooney' chant.

"Of course, I have a lot of respect for the club," Rooney said. "It is a club I love. I spent 13 years there. I am on the touchline as Derby County manager, so my loyalty has to go to Derby County.

"But at the Europa League final, I'm there supporting them on. There will be moments again where I am there as a Man United fan but in today's game my full focus and attention was on Derby County.” 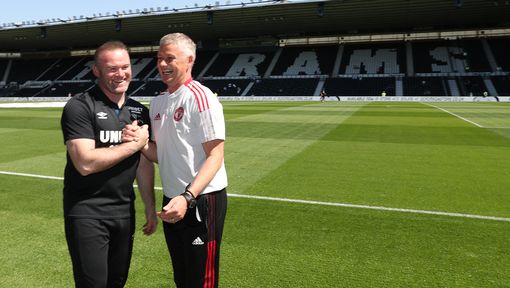 United could be about to make some serious waves in the summer transfer window.

A deal for Jadon Sancho is done, progress is being made over Raphael Varane and now a report claims Saul Niguez could be signed too.

French reporter Francesc Aguilar claims United are in 'advanced negotiations' over a move.

Tom Heaton's debut against Derby yesterday brought with it fresh confusion about the goalkeeping situation at United.

The Athletic say both David de Gea and Dean Henderson are expected to be at United again for next season, a situation Ole Gunnar Solskjaer previously admitted wasn't ideal.

The report also claims Wolves approached United regarding a loan for Henderson but saw their inquiry 'firmly rebuffed'.

Take this one with a bit of caution, though the signs are promising over a move for Raphael Varane.

One report states he will finalise a move to Old Trafford this week, but it is always a dangerous game putting a strict deadline on a transfer announcement - e..g Jadon Sancho.

Ole Gunnar Solskjaer insists Jesse Lingard is in Manchester United's plans 'at the moment' following his return from a four-month loan with West Ham.

Lingard started once for United last season before he moved to West Ham in January, scoring nine goals in 19 appearances under David Moyes.

The 28-year-old has entered the last year of his contract and struggled to make the United bench towards the end of last season but Lingard started training with his parent club at Carrington last week. 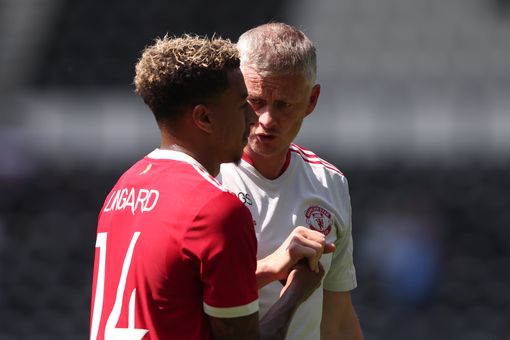 Outside Pride Park, Brian Clough and Peter Taylor are immortalised with a statue of one of English football's great double acts.

Inside the stadium, Ole Gunnar Solskjaer sidled over to Wayne Rooney by the bowling green of a pitch and clasped hands before posing for a picture, Manchester United Premier League title winners reunited.

Rooney and Solskjaer contributed to the start of United's second 'three-peat' back in 2007, Solskjaer's last as a player. Now as a manager, the minimum expected of him is to oversee a genuine challenge in what he intends to be his third full season.

Made a routine save and then a great save. Does not move like a third-choice goalkeeper. 8

Lasted beyond the hour at the club he was at on loan last season. Dithered on an occasion but otherwise fine. 6