Stay tuned for the latest Man United transfer rumours and breaking news throughout the day.

Manchester United have travelled down South to Surrey for a pre-season training camp.

Ole Gunnar Solskjaer's side made a winning start to the summer on Sunday as they defeated Wayne Rooney's Derby County 2-1 thanks to goals from Tahith Chong and Facundo Pellistri.

Now United have gone on a week-long camp ahead of their second friendly against QPR on Saturday, with Daniel James and Scott McTominay joining up with the squad following their participation in Euro 2020.

Elsewhere, United are continuing to make progress on a deal for Real Madrid defender Raphael Varane.

Sources have told the Manchester Evening NewsUnited are 'inching closer every day' towards finalising a deal for the 28-year-old Varane.

Man United are prepared to be 'patient' for Eduardo Camavinga

The Reds are prepared to bide their time in their pursuit of Eduardo Camavinga.

That's what The Athletic have reported today, claiming Old Trafford chiefs believe Rennes' asking for Camavinga could go down as the end of the transfer window nears.

Camavinga has just one year left on his contract with the Ligue 1 side.

Atletico Madrid's Saul Niguez is the latest player to be linked with a transfer to Manchester United this summer.

The MEN understands United are targeting two more major signings once Jadon Sancho's imminent arrival is finalised and reports emerged on Tuesday claiming Saul's agent has made contact with Old Trafford chiefs over the possibility of a transfer.

It's said that Saul's representatives have also contacted Liverpool, though, and the Spaniard has also been heavily linked with Barcelona, but it's not a surprise the midfielder is seemingly in demand after clinching the La Liga title with Atletico Madrid.

Saul, 26, made 41 appearances across all competitions for Atletico last season and over the years he's built a reputation as one of Europe's finest players, boasting a varied skillset on the ball which could offer United the perfect balance they need in midfield.

OPINION: United have a transfer issue that could still hurt them this season

With less than a month to go until the start of the new season we're no closer to knowing who will be Manchester United's first-choice goalkeeper this season.

The first pre-season friendly of the summer was the chance of third and fourth-choice goalkeepers Tom Heaton and Lee Grant to get a run out and with neither Dean Henderson nor David de Gea in the training squad at Pennyhill Park this week, that is likely to remain the case at Queens Park Rangers this weekend.

As the curtain came down on last season Ole Gunnar Solskjaer did admit that the goalkeeping situation at Old Trafford needed a "solution for next year, definitely". Solskjaer had spent the season being fairly evasive over De Gea and Henderson and his final pre-match press conference of the Premier League season was the first time he'd publicly accepted the situation was unsustainable.

Manchester United have received no contact from Paris Saint-Germain about a possible move for Paul Pogba.

Reports in France claim Pogba, 28, is close to an agreement with PSG but the Ligue 1 runners-up have not formally approached United. Pogba's agent, Mino Raiola, has been contacted for comment.

Pogba has entered the last year of his United contract and the Manchester Evening News reported in April he is relaxed about his future and prepared to stay for at least another year if a summer transfer does not materialise.

Manchester United set a unique measure of what constitutes a world-class footballer with their 2008 Champions League winners. Edwin van der Sar, Rio Ferdinand, Nemanja Vidic, and Patrice Evra, starters in Moscow, also lined up in the 2009 and 2011 final schoolings by Barcelona.

Ferdinand was a centre-back without peer between 2006 and 2008, a run halted by a problematic back injury. His partnership with Vidic was unrivalled but Vidic ironically improved without Ferdinand in 2008-09, when he accepted the Sir Matt Busby Player of the year award, a statue as hard as the Serbian. "He comes from Serbia, he'll f-----g murder ya," the chant went.

United are finalising paperwork ahead of announcing the £72.9million arrival of Jadon Sancho and are progressing with a deal to sign Raphael Varane from Real Madrid, having already welcomed back academy goalkeeper Tom Heaton.

The United manager Ole Gunnar Solskjaer is keen to add Atletico Madrid right-back Kieran Trippier to his squad and the club is also open to recruiting a midfielder amid, as well as another centre-back.

Rennes president Nicolas Holveck has revealed it's possible that Eduardo Camavinga leaves the club this summer.

"Discussions are still ongoing, everything is open, either for a departure during this transfer window - if an offer satisfies everyone - or to extend (his contract)," Holveck told RMC.

"He won't leave for cheap, we've had a lot of discussions but nothing is complete one way or another."

Manchester United's Jadon Sancho transfer strategy turned out to be smart in the end.

Last summer's transfer window was deemed a failure for United, a missed opportunity to build on the promising signs of the previous year - and then they went and improved anyway in the 2020/21 season.

While talk of progress without trophies is a bugbear for many United fans, there can be no denying that the team has been getting incrementally better, finishing one place higher in the Premier League and finally reaching the final of a major competition under Ole Gunnar Solskjaer. 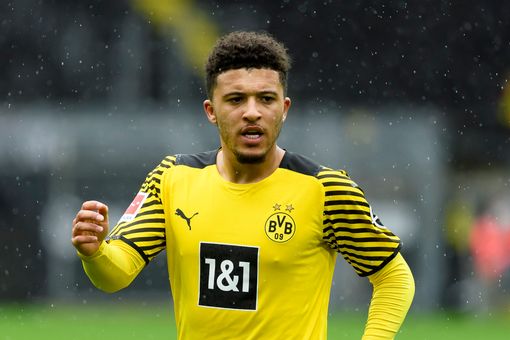 Wayne Rooney has revealed that former United youngster Ravel Morrison has already had a big impact in training at Derby County.

"I think with Ravel, he is very misunderstood,” he said, “His ability is clear for everyone to see.

“Since he’s been with us, the standards in training have gone up. There are things he does on and off the ball that I can recognise immediately. That’s where he’s brought the levels up in training.

“He showed some nice touches on the pitch against United but we need to remember he hasn’t played for a very, very long time. So it was natural that physically he was going to tire.”

This feels as much a Barcelona transfer blog as it does a United one today.

The latest reports from Spain suggest that Barca could look to United to offload high earner Antoine Griezmann as the continue to try and balance their books.

Sport say a proposed swap deal with Atletico Madrid's Saul Niguez is off after Barcelona asked for an additional 20 million euros, or Joao Felix, and Atletico refused. Instead, it's suggested Barcelona will look to the Premier League for a buyer for Griezmann.

They say United and Chelsea would be interested if the conditions were right, while Juventus are also in the mix. However, they add that Griezmann himself would have to be convinced by the project, and that his future is a real problem for Barca.

It's not just Paul Pogba being linked with Barcelona, as Donny Van De Beek is the latest United midfielder to be connected with a move to the Nou Camp.

They claim Van De Beek could join on a one-year loan deal, or on a permanent transfer with Samuel Umtiti joining United in return.

Danny Ings wants to join United this summer, it's claimed.

TalkSport say the Southampton striker has his heart set on a move to United or City after turning down a new contract at St Mary's.

However, the report adds that Southampton are yet to receive any enquiries for Ings, 28, and that United might not be as interested in him as he is in them.

As the wait to sign Raphael Varane goes on, reports say United have tried their luck with a bid for Napoli's Kalidou Koulibaly.

It's claimed Napoli need to save €22m this summer, and that a €30m offer coupled with €22m in wages for the remainder of Koulibaly's two-year deal, would represent a saving of around €50m.

However, Napoli reportedly want to send a message that they won't sell any players for cheap, and they are prepared to keep star defender Koulibaly.

Saul Niguez appears a man in demand, as rumours of a swap deal with him and Barcelona's Antoine Griezmann continue.

AS say that swap deal hasn't gathered much pace in recent days, and that instead Saul's agent has been contacting United and Liverpool to sound out a potential move to the Premier League.

Atletico are said to be calm about the situation, and would ask for €40m for their midfield man.

File this one under the more unlikely signings to happen.

Mundo Deportivo say cash-strapped Barcelona want to make a 'beast' signing to shock the media after a summer of free transfers and cost-cutting departures.

Among a host of seemingly-unattainable names, Pogba is mentioned as the 'impossible dream', with the report saying: 'they work tirelessly to find that powerful medium that can enter the market in some exchange or for a very low price."

Barcelona cannot register new players until they show La Liga they are saving four times as much as any expenditure on those additions. Given that United would require a huge sum for Pogba, this one seems over before even beginning.

It's claimed he wants to move to the Premier League and is 'ready' to accept United's proposal, but will wait until talking to Real Madrid before committing to that decision.

Manchester United are continuing to make progress on a deal for Real Madrid defender Raphael Varane.

Sources have told the Manchester Evening NewsUnited are 'inching closer every day' towards finalising a deal for the 28-year-old Varane.

Discussions over personal terms have been productive and Varane expects to become a United player this summer.

Bruno Fernandes and Paul Pogba are not due to return to Manchester United for another week.

Fernandes and Pogba were on European Championship duty with their nations until Portugal and France were eliminated at the round-of-16 stage three weeks ago. Pogba is on holiday in Florida while Fernandes has stayed in Portugal for his summer vacation.

United started their pre-season schedule with a 2-1 win at Derby County on Sunday and next travel to Queens Park Rangers on Saturday. The squad will spend this week at Pennyhill Park in Surrey, the base of their first UK training camp.

Rafael da Silva has backed Eduardo Camavinga for a move to Manchester United in the summer transfer window.

Camavinga, 18, is one of the midfielders currently under consideration by Ole Gunnar Solskjaer as he weighs up a possible move this summer.

The France international is out of contract at Rennes next summer and is reputedly available for €30million (£25.7m) in the current transfer window.