Arguably the two biggest clubs on the planet have enjoyed a fairly hit and miss relationship over the course of their history, with a number of high profile players often swapping Manchester for Madrid and vice versa 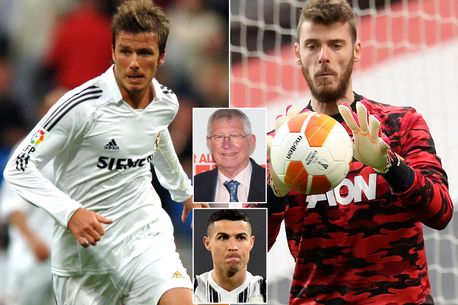 Manchester United and Real Madrid are most likely the only two clubs that could be identified by anyone at any corner of the globe, no matter how remote, such is their fame and stature.

The pair boast a ludicrous amount of honours between them, as well as some of the game's biggest stars plying their trade for either, or often both.

Ahead of a European Cup semi-final back in 1968, then-Real Madrid president Santiago Bernabeu, the same 'father of Real' the Los Blancos home ground is named after, claimed: "I want Manchester United greeted and treated and respected as the greatest club in the world, as our friends for many years, nothing must go wrong.

"If we are beaten in the European Cup by Manchester United on Wednesday then we shall have lost to a great team."

With those generous words, a friendship was born, though it has hardly been smooth sailing since then.

Here are just some of the sagas that will forever bind the two clubs, for better or worse..

Few signings scream 'Galactico' more than 'Golden Balls' himself, Beckham calling time on his lengthy United career in favour of a move to Madrid where he wold cement his status as a global superstar.

Real's pursuit of the most marketable footballer on the planet came at a price, with former sporting director Jorge Valdano conceding the club had to sell a number of stars in order to fund their move for Beckham.

Valdano told Marca : "The plan was to make Real Madrid the most successful team, but also the richest. We began to sell every player we could, then to make things work we had to compensate that with academy products.

"We jumped the limit the day we signed Beckham, he unbalanced the relationship between football and marketing."

Beckham's iconic '23' Real Madrid jersey is still worn as a fashion accessory by adoring fans nearly 18 years on from his move.

If the transfer of Beckham from Manchester to Madrid was relatively harmonious, Real's deal for Cristiano Ronaldo was anything but.

United actually took the rare step of launching legal action against Real Madrid such was their strong feelings on what they felt was blatant tapping up from Los Blancos.

In June of 2008, United reported Real to FIFA over their approaches for Ronaldo, only to be told ten days later FIFA would take no action, while then-president Sepp Blatter made some questionable comments which implied his sympathy lay with Ronaldo when he said "If the player wants to play somewhere else, then a solution should be found. There's too much modern slavery, in transferring players or buying players."

While Calderon aimed to play down the dispute, by claiming "the club at which I'm president sleeps with a clear conscience", Sir Alex Ferguson felt differently.

Four months after FIFA confirmed they would be taking no action against Real Madrid, Fergie uttered what went on to be one of his more memorable press conference sound bites.

When asked if a deal between the two clubs over Ronaldo was close, the United icon responded: "You don't think we'd get into a contract with that mob, do you? Jesus Christ. I wouldn't sell them a virus." Hardly happy families

However, the summer of the next year saw Ronaldo finally secure his "dream move" as Real Madrid shattered the world record for a transfer fee, parting ways with £80m for the Portuguese star, money well spent when you factor in the four Balon D'or's won while a Madrid player.

Despite some reports claiming United's owners, the Glazer family, had gone above Sir Alex's head to sanction the deal, they remained adamant the manager had the final say, contradicting his previous "wouldn't sell them a virus" claims.

Sergio Ramos only recently called time on his 16-year stay at Real Madrid, seeing out his contract before joining French giants Paris Saint-Germain, but things could have been very differently six year's prior, at least that's how it appeared.

The summer of 2015 saw the World Cup winning central defender regularly linked with a move to Old Trafford in what would have no doubt been the biggest deal of the summer.

However, the same summer it was revealed United may have been duped by Ramos' team as part of an elaborate plan to bolster his contract with Real Madrid, though the defender protested his innocence.

"I’m being honest I never said I wanted to leave, I was quiet. I never said anything out of respect for my team-mates and the president, I never rang the office to ask for more money. I’m just very happy that I have renewed and I want to stay here for the rest of my career" Ramos claimed.

"My idea was to always be here and I always wanted to retire here if the president would allow it, and I’m thankful I have a new challenge to be the captain of this team. The priority is always Real Madrid, keeping our fans happy and winning titles."

"I know this renewal has taken a while but my heart and head have always been with Real Madrid so I couldn’t be happier."

United, meanwhile, were left the victim of one of the oldest transfer tricks in the trade.

Few could believe that a mega-money move between two of the biggest clubs on the planet had been scuppered by a faulty fax machine.

Those people, technically, would have been correct in their scepticism, as technically it was not a fax machine that prevented David de Gea's move from Man Utd to Real Madrid, in a deal that would have seen Keylor Navas head in the other direction.

All deals are finalised and confirmed via the international Transfer Matching System, FIFA’s automated online mechanism.

Once two clubs agree on a deal, like both parties did in the case of De Gea, they both log in and enter the details of the move - if they match, the transfer is confirmed in a process that takes no more than eight minutes, an easy enough process for two clubs of this magnitude, one would assume.

However, as the clock struck 12 at night on the 31st of August 2015, the Spanish league were still without any registration request from Real Madrid for De Gea.

By the time it did arrive, 30 minutes after the deadline, the forms were sent incomplete, something those at the top of the Real Madrid hierarchy knew, but sent anyway with little more than hope left.

It was later revealed that not only did the Spanish giants miss the league deadline for registering new players, they were also too late by the Transfer Matching System's regulations.

With both deadlines missed, De Gea remains at United six years later, while Keylor Navas, who did not want to make the swap, ahs established himself as one of the best shot-stoppers on the continent in the colours of Madrid.

This is one that remains in the balance as things stand, with United reportedly on the verge of confirming a deal for the centre-back who has been at the Bernabeu for the best part of a decade.

The 28-year-old is rumoured to be keen on a new challenge and sees the Premier League, more specifically Man Utd, as his ideal destination to test himself in pastures new.

While the latest is that Varane is as good as a United player with both personal terms and a fee between the clubs agreed, members of the Old Trafford faithful will still have memories of that Ramos saga from just over half a decade go.

Though a deal for Ramos never appeared quite this close back then, United fans will only breathe a sigh of relief and believe they've got their man when Varane is pictured holding the shirt, though if recent dealings between these two are anything to go by - that could still be a while away yet.