Italy midfielder Marco Verratti has previously had a bad run-in with the referee for this weekend’s Euro 2020 final against England. 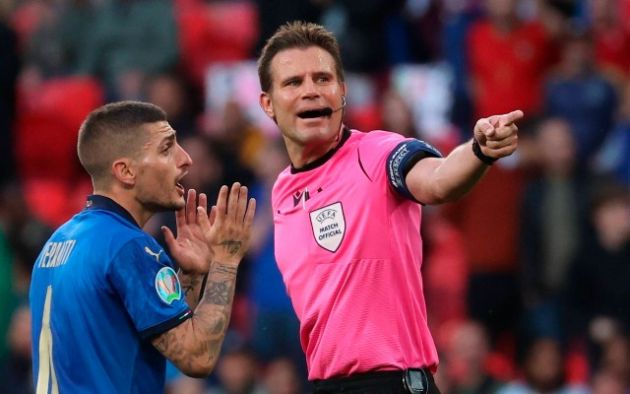 Bjorn Kuipers is set to  take charge of the big game at Wembley, and it may be of interest to England fans that Verratti has had what sounds like a seriously bad clash with him when they’ve met in the past.

The Paris Saint-Germain playmaker insists the ref has previously sworn at him when he and his team-mates disputed a decision.

This came up during the Manchester City game in last season’s Champions League, and it will be interesting to see if history repeats itself in Sunday’s final.

Verratti said: “The referee also told me ‘f*** you’ twice. For them it’s normal, if you say that it’s ten matches [ban]. I talk a lot to the referee but I don’t say that.”

This led to PSG manager Mauricio Pochettino insisting that Kuipers should be investigated over the incident.

UEFA never took this any further, and Kuipers generally remains highly regarded in the game, as evidenced by him being given such an important match to officiate.