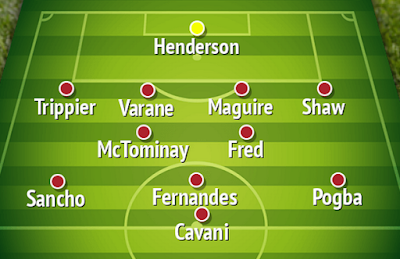 Jadon Sancho's £73million move to Old Trafford has been signed and sealed if not yet delivered, while there is confidence from within the club that deals for Raphael Varane and Kieran Trippier will materialise.

The MEN reported earlier in the transfer window that United were working on a £50million package to sign Varane, while the club will be hopeful of securing Trippier for around £20million - despite Atletico Madrid wanting more - given he is out of contract in the Spanish capital in less than 12 months.

With that in mind, we've taken a look at three different ways in which United could line up with Sancho, Varane and Trippier in the starting XI..

Ole Gunnar Solskjaer's favoured formation from last season saw Fred and Scott McTominay form an axis at the base of the midfield, with Bruno Fernandes in the No.10 role. Paul Pogba played some of his best football off the left flank earlier in the year and that is the most logical position for him in this system.

The right side of this back four is comprised entirely of new signings, with Varane and Trippier lining up, with Sancho ahead of them and Edinson Cavani at the tip of the arrow.

It was reported by ESPN last week that United's players were told by Solskjaer upon their return to Carrington earlier in the month that he wants to implement a more attacking 4-3-3 system regularly in the upcoming season.

That would suit Pogba down to the ground, judging by his impressive performances in a similar set-up for France at Euro 2020. Pogba playing centrally and one of Fred or McTominay dropping out allows Marcus Rashford to come in on the left flank.

If they don't sign a new holding midfielder this summer, and it is looking unlikely that they will, McTominay probably just edges Fred as the more capable lone anchor, although the Brazilian shouldn't be discounted following an impressive Copa America showing with Brazil.

This is the formation that Solskjaer favours when he wants his team to play on the counter-attack.

Aaron Wan-Bissaka has the defensive nous to operate, or least be trialled, in a back three, with Trippier and Shaw as the wing-backs. Trippier and Shaw combined in this system for England's goal in the Euro 2020 final.

This formation sees a return of the McTominay-Fred pivot, with Fernandes in behind a pacy pairing of Mason Greenwood and Rashford.