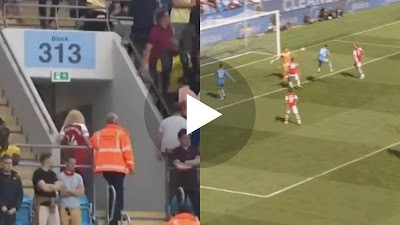 There comes a point where finding humour in Arsenal’s current woes turns into feeling awkward sympathy and this may well be it.

Coming into Saturday’s game, the Gunners were the overwhelming underdogs and it’s not been hard to see why.

After falling behind to two early goals from Ilkay Gundogan and Ferran Torres and seeing midfielder Granit Xhaka sent off for a reckless lunge on Cancelo, Arsenal fans then saw striker Gabriel Jesus add the Citizens’ third.

In light of what has been an abysmal first-half display, BT Sport’s cameras picked up droves of Arsenal fans leaving the Etihad stadium after just 36-minutes.