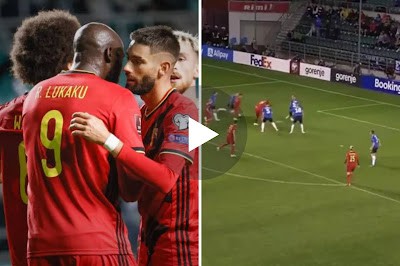 Chelsea striker Romelu Lukaku has got on the scoresheet for Belgium tonight in a World Cup qualifying clash with Estonia.

Lukaku re-signed for Chelsea earlier in the month from Inter Milan. Somehow, that wasn’t the highest profile Premier League homecoming of the summer.

Still, the Belgian appears to be the final piece in Thomas Tuchel’s Chelsea jigsaw, with his goal on his debut against Arsenal testament to that.

Lukaku appeared intent on carrying his goal-scoring form into the international break, bagging against Estonia tonight.

Lukaku is so Sharp? pic.twitter.com/7Q8s0ryNx3