Manchester United midfielder Paul Pogba has created a viral moment after deciding to move aside a bottle of Heineken beer after France kicked off their Euro 2020 campaign with a victory over Germany. 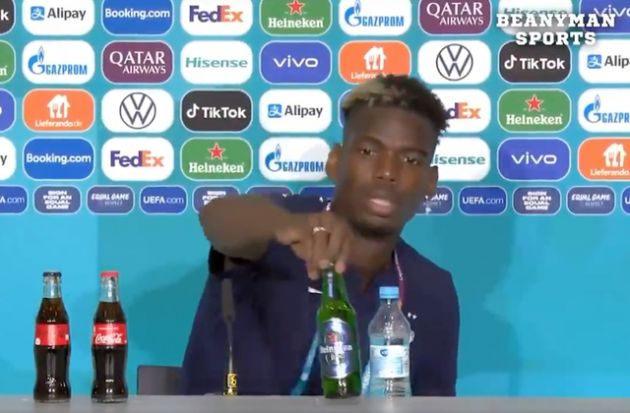 Pogba, who was named Man of the Match after a stellar performance for Les Bleus, was tasked with facing the media in the post-match press conference but had something to do before he started.

The 28-year-old looked very surprised and disappointed before the proceedings began as he moved a bottle of Heineken beer to the floor.

The incident has been compared to the moment earlier this week in which Cristiano Ronaldo moved aside a bottle from another tournament sponsor in Coca-Cola, promoting the drinking of water instead.

Pogba’s choice cannot be compared to Ronaldo’s at all, the star is Muslim and clearly did not wish to be pictured in front of an item from an Alcoholic brand, in behaviour that could’ve been deemed haram.

First Ronaldo with the Coca-Cola…

Now Paul Pogba wasn’t happy with the Heineken in front of him at his press conference ?? pic.twitter.com/SU1ifQPGOP

nah the alcohol is what’s haram (well, technically being drunk is haram, but that’s a whole other debate) so non-alcoholic stuff is technically fine but if Pogba is pictured in front of a Heineken bottle it makes no difference if it’s non-alcoholic, the brand is alcoholic.

Fans later noticed that the bottle was of the Non-Alcoholic variant from the Dutch brewer, but the principle still stands and Pogba had every right to do what he did.

Hopefully UEFA and the relevant members of staff ensure a similar mistake isn’t made in the future when players that follow the religion of Islam are tasked with media duties.