Watch Video: Gareth Bale continues purple patch with another goal for Tottenham after Harry Kane puts it on a plate with smart assist 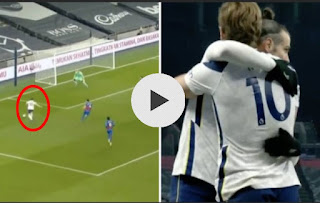 Gareth Bale is on fire! The Tottenham winger has opened the scoring against Crystal Palace this evening after some great work from Harry Kane.

Bale endured a slow start to his return to North London, but has exploded into life in recent weeks, being Tottenham’s star performer and most prolific goal scorer.

The Welshman, watched by former Wales boss Chris Coleman who is providing co-commentary for Sky Sports tonight, has made the difference once again.

Harry Kane found himself with a yard of space inside the penalty area, which is always going to prove to be bad news for the defending side.

Kane played the ball across the face of goal, with Bale arriving at the back post, with his movement and shrewd offensive positioning being rewarded with a tap-in.